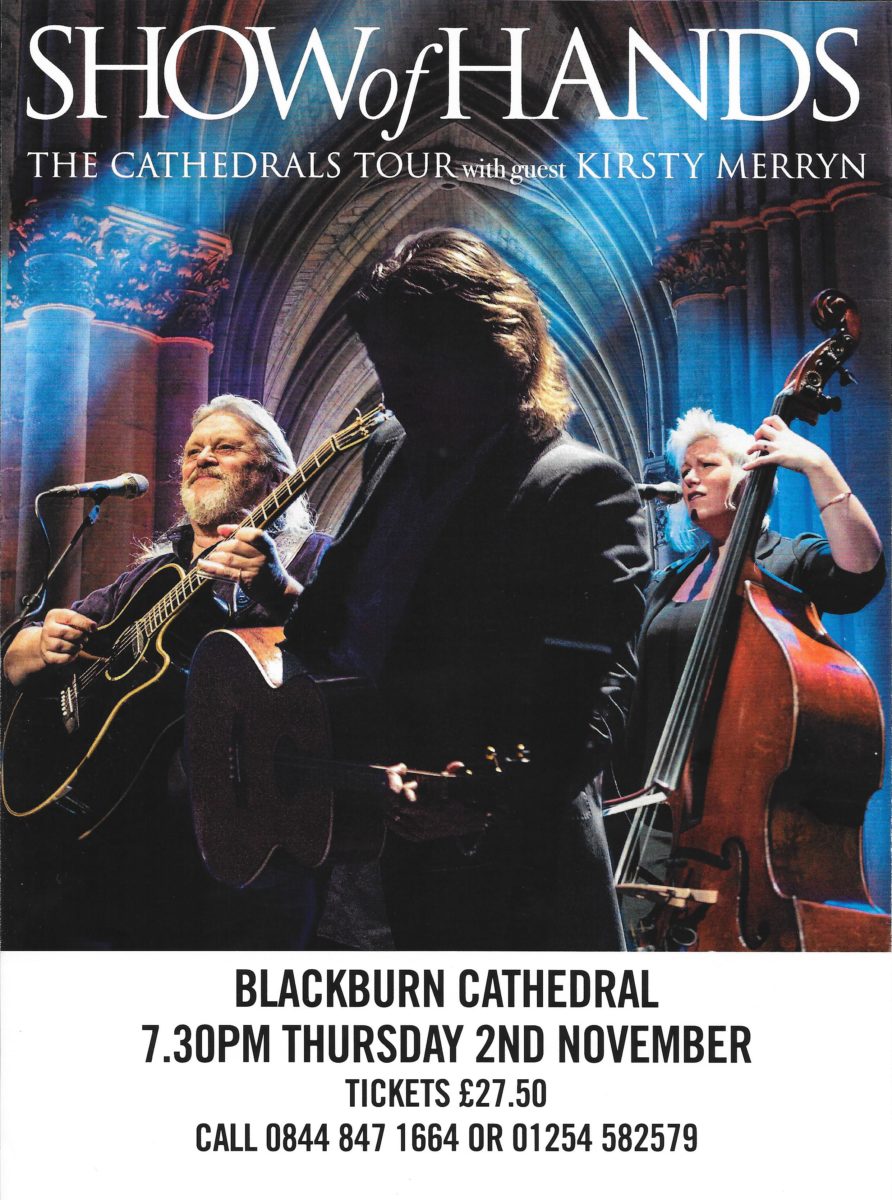 About the Show of Hands

The Show of Hands have unequivocally become one of the leading forces in British folk. Steve Knightley and Phil Beer are respectively recognised as one of the UK’s best singer songwriters and one of its finest multi instrumentalists. Without frills or fanfares they have carved a unique niche built on a carefully constructed cottage industry and become one of the most in-demand bands on the circuit.

An alchemist couldn’t have come up with a more potent, magical mix than that of Phil Beer, who can, as The Scotsman observed, “play nearly every stringed instrument known to man” and the inspired Steve Knightley, described by broadcaster Mike Harding as “one of England’s greatest singer songwriters”.

One of Devon’s greatest success stories started with the guys growing up on opposite sides of the River Exe, though Steve was born in Southampton and Phil hailed from Cornwall. Playing in different bands their paths eventually crossed and they joined forces to play the Exeter pub and club circuit before taking off in different directions.

After gaining a degree at Coventry University, Steve started teaching in London and playing the capital’s rock scene while Phil pursued the life of a pro musician, playing in Arizona Smoke Review and the revered Albion Band. But when Steve returned to the West Country in the mid 80s they started gigging again and in 1991 Show of Hands was formed. Unusually their first album was a live one. “Live 92” was recorded at Dorset’s Bull Hotel in Bridport and its excellent reviews helped them break into the festival circuit and tour with Ralph McTell.

After working with exiled Chilean musicians in the band Alianza – which saw them learning the South American cuatro and soaking up new rhythms – Steve wrote such memorable songs as Santiago, Armadas and Columbus (Didn’t Find America).

Following their first studio album Beat About the Bush Show of Hands released Lie of the Land in 1995 which ‘Q’ Magazine declared “startlingly good”, making it their folk album of the year.

But despite an escalating fan base they still couldn’t command London gigs. So they thought they’d create a modest one of their own – at the Royal Albert Hall! Hiring the hall to the amusement of the media and the cynicism of sceptics they had the last laugh, with a sold out show. It was a huge gamble but the night of March 24, 1996 proved that for this enigmatic duo anything was possible. Five years later they reprised their appearance at Kensington’s “village hall” to celebrate their 10th anniversary and this time the sell-out was recorded by Carlton for the ITV Network.

A particularly productive time followed with another studio album Cold Frontier (2001) and The Path (2003), an instrumental coastal odyssey commissioned to mark the 25th anniversary of the South West Coast Path. In 2003 they released Country Life, with its stand out rock-style title track that went on to be used as a soundtrack by the Commission for Rural Communities for two films, launched in Westminster. Praised for its”finger on the pulse” topicality about the decline of rural life, Steve was later interviewed on BBC Radio 4’s Today programme and the pair appeared on BBC TV’s Countryfile – the most watched factual programme on any channel – where they performed Country Life.

In 2004, after numerous nominations, Show of Hands struck gold at the BBC Folk Awards, winning the coveted Best Live Act title – the only category voted for by the public. They were joined by Miranda Sykes on double bass and vocals for their autumn 2004 UK tour – a tour that triggered a live 22-track double album As You Were. Miranda has been adding another dimension to the Show of Hands sound ever since.

May 2006 was a defining moment when they unveiled a strident new sound with Witness produced by Grammy-nominated Simon Emmerson and “Mass”of Afro Celts. Songlines Magazine called the album “A beautiful portrait of modern rural Britain, intensely compassionate and filled with carefully contained rage.” Described as “a cinematic journey of the West Country” it was widely acclaimed with some of Steve’s finest writing in the title track, The Dive and the stirring Roots – a rally call for the English to get behind their identity and musical heritage spurred by a certain comment by one-time Culture Minister Kim Howells – that his idea of hell was three Somerset folk singers in the pub!Roots found champions in unlikely quarters with some even calling for it to be the new national anthem!

After such a journey it is clear that the Show of Hands story is a remarkable one and they are now, as BBC Radio 2’s Mark Radcliffe says, “at the top of their game”.

In 2006 they were quirkily voted Greatest Devonians in a poll beating historic figures like Sir Francis Drake and modern day music icons Chris Martin, Muse and Joss Stone while they were later voted the West Country’s favourite musicians in an ITV series and invited to join the West Country Hall of Fame. Despite all their success they have never sold out on the West Country and on St George’s Day 2006 they performed a fund raising gig that helped save a rural Devon post office.

When the time came to think of how best to celebrate their incredible 15-year partnership in 2007, the Albert Hall place beckoned again. This time it sold out rapidly – a testament to the huge popularity they have achieved with a sound that continues to dodge the genres and puzzle the industry.

They continued to celebrate their enduring musical partnership with a definitive double “Best of” CD, trawling an enviable back catalogue and also made appearances with Peter Gabriel and Jools Holland.

Two of the most popular ambassadors for acoustic music, their music loses nothing in translation and they have taken it all over the world, from Australia to India, Germany to Canada, the Netherlands to Hong Kong plus key festival appearances including Glastonbury, WOMAD, Cambridge and Celtic Connections.

In 2008 they made their WOMAD debut and headlined the Welsh Proms first Folk Prom. In the autumn they undertook a triple tour including their first standing gig tour and a “Spires and Beams” tour of UK churches, cathedrals and historic buildings with spectacular sell outs at Exeter and Ely Cathedrals.

2009 saw them returning to Glasgow’s Celtic Connections Festival for the third time while Phil took time out to fulfil a lifelong dream of crewing in the Tall Ships race and Steve made solo appearances at festivals including Glastonbury. That autumn saw the release of Show of Hands’ new studio album, Arrogance, Ignorance and Greed, produced by Stu Hanna of the duo Megson and a 37-date tour of English county towns. The topical title track of the album – Knightley’s no-holds-barred lyrics about bankers and bonuses, MPs and expenses – quickly struck a chord with media and public alike, gaining a huge amount of airplay and culminating in success at the 2010 BBC Radio 2 Folk Awards, where it was voted Best Original Song. It was a memorable night for the band with Knightley and Beer also scooping the Best Duo title.

In February 2010 their fame spread further when they were interviewed and performed live on BBC-1’s Breakfast programme and in April Steve and his songwriting was the subject of a half hour Radio 4 programme, Open Country.

2011 saw Show of Hands in great shape with a February appearance on BBC1’s flagship political programme, The Andrew Marr Show, singing Arrogance Ignorance and Greed in front of guests including Foreign Minister William Hague. In the same month Phil Beer was named Musician of the Year in the 2011 Spiral Awards, run by popular music website Spiral Earth. Key appearances that year included Hyde Park on the headline-hitting “March for the Alternative” rally day whilst Steve joined fellow folk musicians performing in front of protestors at Occupy London outside St Paul’s Cathedral.

2012 was a milestone year as Knightley and Beer marked the 20 years of their incredible partnership with a celebratory fourth “Big Gig” at the Royal Albert Hall and released their 14th studio album, Wake the Union. Described as “At a crossroads where Route 66 meets the West Country A303 artery” Wake the Union was a classy confluence spurred by the band’s collaborations with North American musicians.

As patrons of Exeter’s Royal Albert Memorial Museum (RAMM) they were among guests attending HRH The Earl of Wessex’s visit to the exhibition venue in autumn 2012 to mark its Museum of the Year win, following its reopening after a four year multi-million refurbishment. The duo were commissioned to write a special song to celebrate and Knightley penned Home to a Million Thoughts which mirrored the Victorian museum’s new slogan and also appeared on the Wake the Union album. The song featured on BBC Radio 4’s Front Row when the programme visited RAMM.

In 2014 they became the first ever folk act to play at the new Sam Wanamaker Playhouse at London’s Shakespeare’s Globe – an atmospheric candlelight gig in the Jacobean style theatre which will be repeated over two nights in April 2016 on a duo tour that starts at the Thames and ends on the Rhine with Knightley and Beer performing on a Rhine cruise in May.

Marking the centenary of WW1 they made a significant double album “Centenary – Words and Music of the Great War” with husband and wife actors Jim Carter and Imelda Staunton and appeared on BBC TV’s Andrew Marr Show on Remembrance Day.

2015 has seen them celebrate the 17th year of their own signature summer festival at Dorset’s Abbotsbury Sub Tropical Garden, complete more solo tours and receive honorary doctorates from the University of Plymouth for services to music.

A new album The Long Way Home sees them returning to their musical roots in a very “English” recording with fresh arrangements of traditional English numbers and five new Steve Knightley original songs including the topical and chilling Mesopotamia. Guest musicians include Knightley’s own 13 year-old son Jack Knightley on cajon.

After such a journey it is clear that the Show of Hands story is a remarkable one and they are now, as BBC Radio 2’s Mark Radcliffe says, “at the top of their game”. 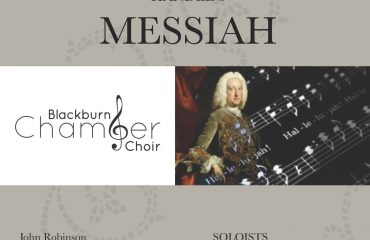 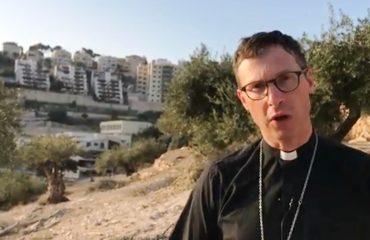 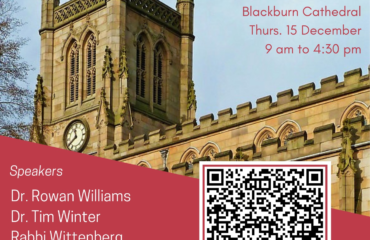