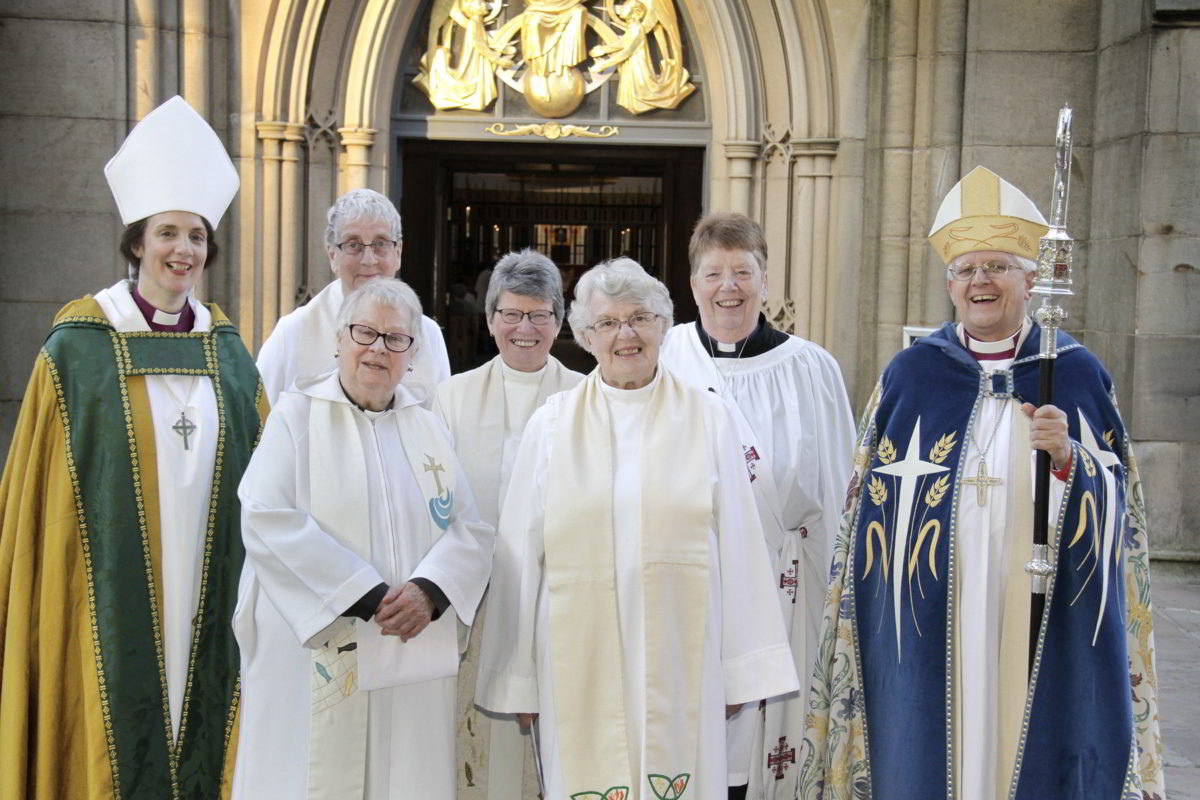 It was a moving day of thankfulness and encouragement as some of the original 13 women priests in Blackburn Diocese, ordained on May 14, 1994, gathered for Silver Jubilee events.

Exactly 25 years on – at 7pm – a special Eucharist took place at Blackburn Cathedral to celebrate the milestone. The Eucharist was presided over by Rt Rev. Julian Henderson, Bishop of Blackburn and The Address was by Rt Rev. Dr Jill Duff, Bishop of Lancaster.

Several of the original cohort of women priests in this Diocese from 1994 attended the Eucharist. They were Rev. Ann Wood, from Lytham; Rev. Patricia Impey from Lancaster; Rev. Brenda Harding from Lancaster; Rev. Margaret Jenkinson from Hambleton and Rev. Dorothy Hankey from Lytham. For names of all the ‘original 13’, see end of this release.

Bible Readings during the service were given by Rev. Margaret Jenkinson; Rev. Patricia Impey and Rev. Ann Wood and prayers were led by Canon Rowena Pailing, Canon Missioner at Blackburn Cathedral.

After the events Bishop Jill said: “I love those arresting words of Jesus: ‘Look at that woman’. He brought women out of the shadows. I was so thrilled to be able to celebrate 25 years since those first pioneering women were ordained. Today has been celebration of all that has gone before.”

Bishop Julian added: “I have found the ministry of women has enriched our life as a Church and it was good to celebrate today with our first group of women priests.”

At the Abbey retreat, people from across the Diocese had the opportunity to spend time together listening to the stories of some of the original 13 who could be there.

Rev. Brenda Harding, who now has Bishop’s ‘Permission to Officiate’ (PTO) and is based at Christ Church Lancaster, said: “For me personally it was a miracle when the vote happened at General Synod in the early 90s. I was 52 at the time and if it had been much longer, I may not have been ordained! It has been a great privilege to be able to exercise my priestly duties over the years.”

Brenda got chatting to Rev. Barbara Pack who, 25 years on from Brenda, is all set to be priested this coming June. Barbara, currently a Curate at Blackburn St Aiden and St Luke; St Mark and St Philip, said: “As a woman who is being priested this year, today is a special day for me … it has been an amazing journey to this point and to be able to hear the voices of women who pioneered before me, just before I become a priest myself, is very special.”

Rev. Margaret Jenkinson began her priestly ministry at St Oswald’s, Preesall before moving to Carlisle Diocese. She now lives in Hambleton with PTO at the Over Wyre group of churches and came to the retreat with a member of her congregation, Susan Lunn, who has been training to be a ‘Reader’ in her parish. Margaret said: “Looking back on the past 25 years and having the chance to be here today feels really good. It’s actually a bit of a reunion because I haven’t seen many of the women I was ordained in the years since as we all went our separate ways.”

Susan reflected on the importance of seeing women in ministry for her personally, saying: “I have learnt a lot from Margaret over the years. She is very encouraging to me and to others and always sees the potential in people.”

Meanwhile Rev. Patricia Impey added: “Back in the early 90s, when General Synod voted by the necessary two thirds majority to go ahead with the legislation, the path was clear. That day is firmly etched in my memory.

“In the morning I found myself in the middle of a discussion on local radio with a Vicar who was a strong supporter of the legislation and another lady, equally strongly against. A tense afternoon watching the vote on television then followed before, intense relief and a deep sense of ‘journeying confirmed’ and of excitement.”

The ‘originals’ from our diocese who could make the anniversary events were joined by others including Rev. Pam Nicholson, now retired and living in her home town of Colne, who was also an ‘original’ – but was ordained a Priest in Birmingham Diocese in 1994.

Pam said: “I am humbled and grateful to be here today. I can’t believe it’s been 25 years. It has been a period of huge challenges but also of huge privileges … just to be able to celebrate the Eucharist as a Priest was, and continues to be, a highlight for me.”

Also from Colne and attending the Abbey retreat as a ‘lay voice’ and guest speaker was Gillian Beeley, one of 100 women from Lancashire who have ‘made a difference’ and were recently chosen to feature in a new book ‘100 Women, 100 Stories’.

Gillian is PA to the Archdeacon of Lancaster, The Venerable Michael Everitt, and is based at the Diocesan Offices on the edge of Blackburn. Gillian also holds down several other roles including a key role for Together Lancashire, a joint venture partnership between the Anglican Church, the Methodist Church and the Church Urban Fund.

Gillian told delegates: “To put what I do in a nutshell, it would be that I ‘knit people together’ who may be able to work in tandem, so they spark off each other and go and do good things themselves.

“When I was younger, as a woman you were less able to have a ‘voice’. But attitudes have changed and continue to change. I have relished my own opportunities to ‘make a difference’.”

Meanwhile one of the latest generation of women priests, Rev. Hannah Boyd, who is currently a Curate at St Mark’s Layton and St Luke’s Staining, summed up the day by saying: “Today has been a celebration of the legacy of those who have gone before; learning from their experiences and rejoicing in what God has done.”

Women ordained priests in the Diocese of Blackburn on the Feast of St Matthias 1994: