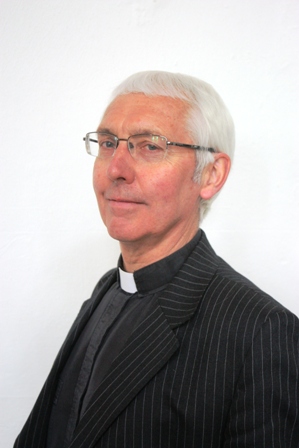 Final over for cricketing Canon at Lancashire’s Cathedral

As Blackburn Cathedral’s Canon Chancellor, Dr Ian Stockton, heads off to retirement in Lincoln he leaves a rich legacy of his seven years’ service to the Diocese behind him.

And a problem…who will tend the garden?

For the most conspicuous feature of the very attractive courtyard at the heart of the new Cathedral quarter, opened last year, is a well-manicured and fruitful garden space containing everything from plums to onions, clearly the work of a committed horticulturalist.

It is just one aspect of Ian’s full-on commitment to life as a pastor and teacher: others include playing cricket, writing poetry, running, glorying in his three daughters and six grandchildren, keeping on the right side of his wife Janet, and leading all aspects of community use of Cathedral facilities.
Ian is now 68 and came to Blackburn in 2011, having established then that he was not regarded as ‘too old’ for a challenging role, different to any he had played before in his life as a minister in various parts of Britain.

“In retirement I shall be writing (and reading) in varied forms, gardening, running and much more. I started running in Dalbeattie for some quiet space away from ministry – into the forest – and have been running ever since!

Ian is the son of a Scottish mother and English father. He was brought up in North Staffordshire, in the mining village of Silverdale where his parents settled after the war.

He thoroughly enjoyed his school days, church and sport, and went to Cambridge to study Theology.
After Cambridge he taught children at a school in Stoke for a year: “Teaching has always been part of my ministry, in a variety of ways,” he said.

Ian spent a year in East London working with West Ham supporters and still has a scar on his left leg through working with some very exuberant teenagers.
From London he followed his calling and headed to Theological College in Nottingham, doing a Post-Graduate Certificate in teaching whilst spending two years at the college.

The next step was to work back in home in North Staffs for five years and he was then called to be a priest in his mother’s home country, in Dalbeattie in Galloway. “Being half Scottish, I support Scotland in most sports, apart from cricket,” he says. 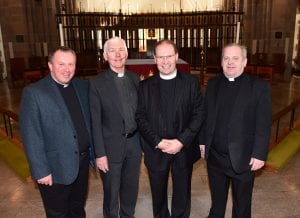 Ian regards himself principally as a communicator: “My call to ministry was to be a pastor and teacher,” something he has been doing very effectively for the last seven years at Blackburn Cathedral.

Ian is still a very active man. He runs in Witton Country Park, plays cricket for the combined Carlisle and Blackburn Diocesan team (indeed has recently opened the bowling!), and is an enthusiastic gardener.

The vegetable and fruit garden in the new Cathedral Court has blossomed thanks to his ministrations over the last 12 months since he and wife Janet moved into the house at 1 Cathedral Close.

Ian moved to Lincoln from Galloway, to help the diocese develop local ministry, both lay and ordained, helping clergy to work collaboratively. He had 13 happy years at Lincoln, becoming Principal of the Lincoln local ministry scheme.
His work in encouraging and developing a Christian presence in all corners of the Lincoln Diocese led to him being asked to contribute to developing collaborative working in other dioceses in England.
He was also asked to work as a consultant for the Church of Ireland, and went to Estonia in 1991 to share the Lincoln experience and benefit from post-Glasnost experiences in the Lutheran church there.
“I went there with a colleague from Lincoln to share experiences with the Lutheran church on developing relationships between clergy and laity, and church growth.

“It was just before the fall of the Soviet Union, and there was much excitement in the country as the freedom they had craved for so long was on the doorstep at last.”

After Lincoln, Ian went to Sunderland to take on a four-parish team ministry that included Monkwearmouth Priory, the former home to the great Christian leader The Venerable Bede.
“I worked closely with the local authorities in the area, the university, and local museums in developing a World Heritage bid. I was able to work on building these relationships in collaborative working between church and community.”

Then after 13 years in the North East came the call to come to Blackburn, in February 2011, as a team member rather than team leader in the role of Canon Chancellor.

“Here I was coming in a supportive role rather than team leader as previously. I felt increasingly drawn to work in the Cathedral environment.
“The job was the newly shaped role of Canon Chancellor, a new challenge, rather than a slide into retirement.

“I’ve been pleased to be part of the Cathedral development, not least in contributing to what the development is for: a part of our wider mission, the fulfilment of William Temple’s pre-war vision for Blackburn.
“I was pleased to be able to appoint a very experienced education officer to Blackburn Cathedral. In the last few years the numbers of school parties that visit the Cathedral has increased tremendously.

“The new facilities of the redeveloped Cathedral Court have provided us with more flexibility – library, meeting rooms, and of course living space for Cathedral staff, both musical and clergy.

“Adult learning has taken off here in new ways: A huge variety including quiet days for adults; Bible study courses, exhibitions of art from local college students; WW1 exhibitions by local schools; embroidery and even the life’s work exhibition of an 85-year-old local painter who was a choirboy here at the Cathedral. 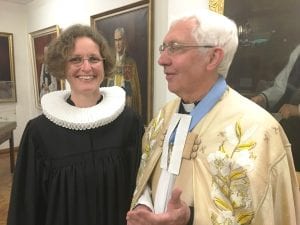 Canon Ian Stockton with Rev. Cornelia Gotz, Dean of Braunschweig Cathedral during a recent visit she made to Blackburn

“I have enjoyed the partnerships that have developed here in Blackburn between the Cathedral and the wider Diocese, the business community, and with the church in Germany.

“Other things have come into my portfolio as well: safeguarding, which is a very important aspect of the church’s work; the Cathedral Café, now safely in the hands of the Northcote Group; the Cathedral Shop and the welcome desk.

“Working with a wide variety of volunteers has been a particular pleasure for me.”

Ian talked about what he hoped to see happen in the future at Blackburn Cathedral.

“I think the partnership between parishes and people outside Blackburn town could be enhanced; so people across the Diocese are encouraged to use the Cathedral and see it as a resource: For example for parish away days, clergy urban retreats, and community groups.

“We have had national conferences taking place here in Blackburn thanks to the facilities of the new Cathedral Quarter and the proximity of a major hotel and I hope this will continue to grow.

“Clergy out in the Diocese need more encouragement and support, and I know that the new Dean, Peter Howell-Jones, is playing his part in this. I fall back on my experience of the benefits of collaborative ministry, affirming the laity and giving clergy the confidence to spread the burden of ministry.

“I believe that we cannot ignore the challenges we face: it isn’t all good news and as Christians we have to be willing to take on board and acknowledge those challenges.
“The good news of the love of God is the key to challenging the darkness in parts of our communities.”

Ian and Janet are leaving Blackburn on an upward curve: “The Cathedral is becoming an increasingly important community resource, for worship, for the arts, for bringing people together across communities, especially those who have never been inside the cathedral before.
“We want to encourage parishes to come and use the Cathedral’s resources to affirm, train and develop ministry.
And there’s good news on the cricket front as Ian adds: “There are three or four ordinands from this year’s cohort who are interested in playing cricket! Hopefully that means the end of seeing a 68-year-old opening the bowling for the joint Diocesan team!”

Pic 1: Canon Ian Stockton with Rev. Cornelia Gotz, Dean of Braunschweig Cathedral during a recent visit she made to Blackburn

Pic 2: Rt Rev. Julian Henderson, Bishop of Blackburn (who was then an Archdeacon) chats with Canon Ian Stockton on the day the future Bishop was announced as taking over the role 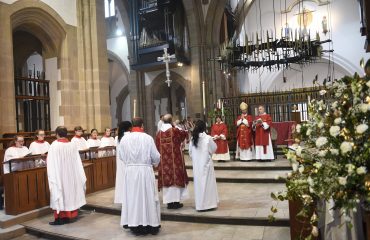 Festival of Prayer for parishes across Lancashire is great success

Churches Across Lancashire Get Ready for 10 Days of Prayer 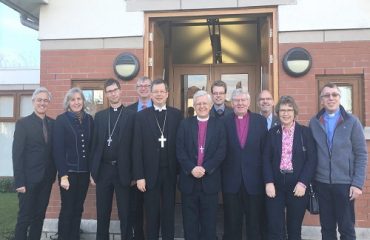 Bishop Christoph Meyns visited Lancashire at the weekend to be installed as an Honorary Ecumenical Canon at Blackburn Cathedral on Sunday.