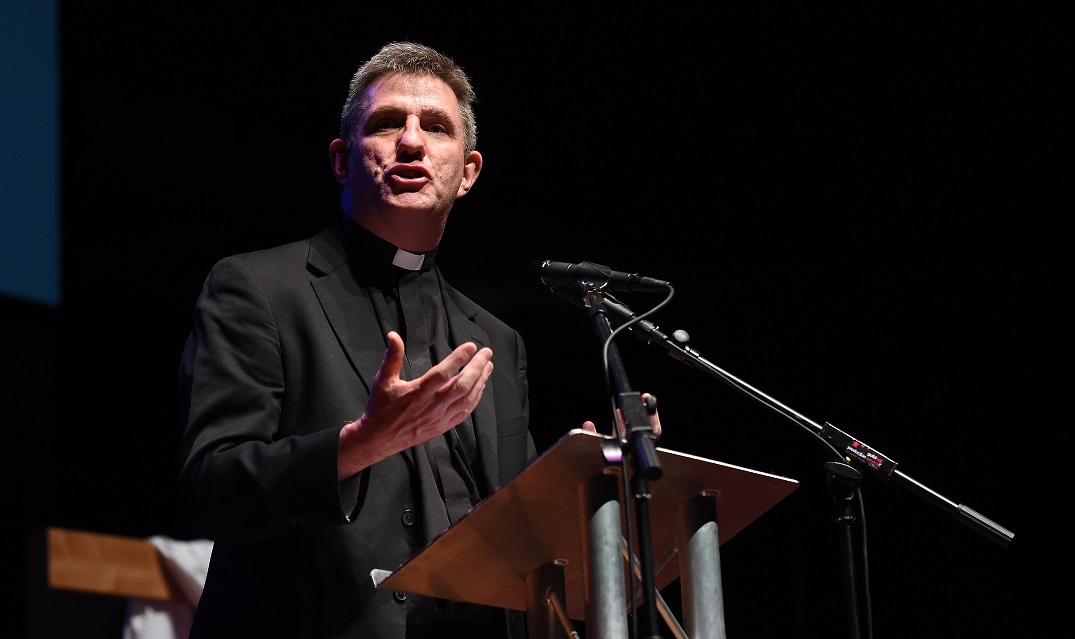 Diocese Bids Farewell to Leader of its Mission Support Team

He has been Blackburn Diocese’s man with a mission for the past seven years.

Now a new calling will see the Leader of The Church of England in Lancashire’s Parish Mission Support team, Rev. Canon David Banbury, taking the reins as the next Vicar of St John’s, Burscough, (which in the Diocese of Liverpool) at the end of March.

David, who lives in Leyland with his wife Kathryn, is known amongst his colleagues for coining memorable phrases to sum up his work – most notable of which is: ‘if you do stuff, stuff happens’.

And plenty of ‘stuff’ has certainly happened since David took up his role!

Diocesan Bishop, Rt Rev. Julian Henderson, the Bishop of Blackburn, even referenced David’s famous ‘stuff’ comment when he said some words of thanks at a Bishop’s Leadership Team leaving lunch held for David this week at Whalley Abbey – the Diocesan Retreat and Conference Centre in the Ribble Valley. 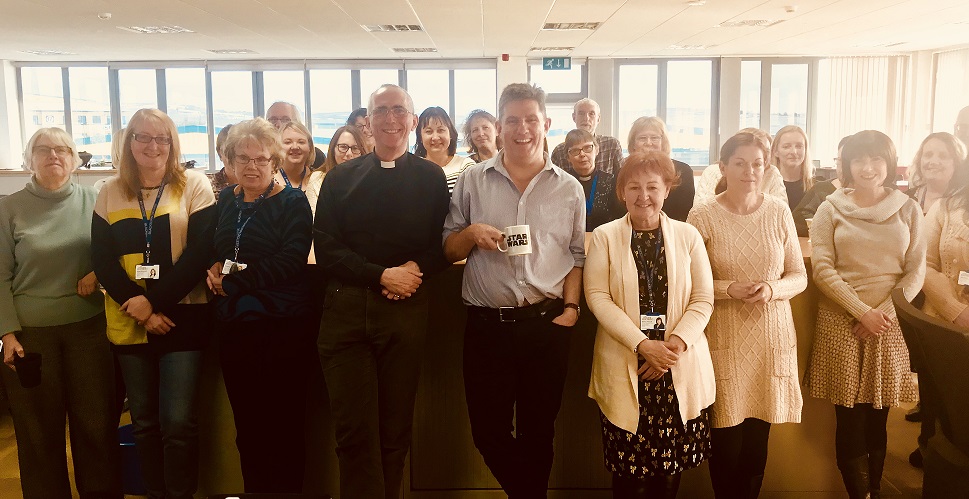 The lunch followed another farewell ‘do’ a few days earlier with his other colleagues at the Diocesan offices on the edge of Blackburn.

Smiling, Bishop Julian said: “Although David is leaving we will keep on ‘doing stuff’ here in this Diocese and see what God does in response.

“I want to thank David for his work over seven years with us. He has done all that has been asked of him – and more.

“The Diocese is more mission-minded and this was seen particularly in the response across Lancashire to the ‘Crossroads’ Northern Bishops’ Mission in 2016, when more than 450 events took place over four days around our parishes.

“We will miss David but wish him and his wife Kathryn well as they move to Burscough.”

It’s been a long and very interesting road for an ordinary lad born and brought up in Durham.

“I made some bad choices in my teenage years – and got into a bit of trouble,” Rev. David Banbury explained this week.

But life changed when he met some Christian folk who he describes as being ‘incredibly kind’ but whose trust he exploited.

David talks at length about this part of his life in a Diocesan video produced as part of a five week ‘Being Witnesses’ course for parishes across Lancashire to use in 2018.

He summed the period up saying: “I behaved badly to say the least, but what really amazed me was the forgiveness they showed me.

“That changed the direction of my life – I started going to St Nicholas’s Church in Durham, and became captivated by a man called Jesus. Things changed straight away as I came to believe in Him and I also felt the call to ordained ministry, right from the start of my Christian life.”

The young David was led to college at Ridley Hall in Cambridge and trained to become a priest. He became a Vicar in 1988 after two curacies in Blackburn Diocese – one at St James, Blackburn and the second at St Cuthbert’s, Fulwood, near Preston.

“I had a real heart and desire to help other people hear about Christ; what He means to the world, and how he transforms peoples’ lives. This was such good news it just wasn’t fair if I kept it all to myself!”

David’s first post as a vicar was in a tough area of Bradford. He then worked as an evangelism adviser for Church Pastoral Aid Society; returning to parish ministry in Stratford upon Avon, before taking up the post in Blackburn Diocese in 2011.

All the way through his career, David has felt a strong call to mission.

He explained: “There is a double tension in me: I love local church ministry to congregations, but in the other roles there is an opportunity to serve outside a local platform and be an asset to the wider church, leading churches into growth.

“So as Leader of the Parish Mission Support team I have been able to serve an entire diocese and region of some 250 plus parishes.”

Looking back on the last seven years, what does David feel has been achieved?

“I am thrilled by the way we have developed the Vision 2026 initiative with its call to make disciples, be witnesses and grow leaders for Jesus Christ alongside a growing commitment to sharing the Christian faith with a combination of words and actions throughout the Diocese.

“Evangelism is now very much on the table and being considered by many of our churches with many ‘having a go’ at sharing their faith; seeing God is faithful when they do and that people are being drawn towards Christ.

“I was inspired and impressed by our Diocesan-wide Crossroads Mission in 2016, with the Archbishop of York and Bishops from across the northern Province leading the way alongside our clergy and parishioners.

“The legacy of that, in running parish missions and now writing the Being Witnesses course for parishes to use in their quest to spread the Good News, has been another highlight for me.

“I regard the marvellous colleagues I have worked with in Blackburn Diocese as being another blessing of my time here. The support from them has been fantastic. I recognise the value of our focus on social action and social justice and sharing our passion through words and through evangelism.

“Seeing people of all ages coming to confirmation and affirming their faith is a wonderful part of this job.”

A man of many talents, David is also a playwright, having written two plays, ‘Home Front: Front Line’ and ‘Brothers in Arms,’ both of which have been extensively performed in Lancashire and beyond including last year’s Edinburgh Fringe Festival.

As David prepares to move on, where does he think the future focus of parish mission work should be in the coming years?

“The last thing Jesus said was calling us to go out and make disciples. We need to prioritise that business of making disciples – making sure that people get the chance to hear the Good News and get the chance to respond to it. That should be our number one priority.

“To serve the nation to our best ability, we need a thriving and growing body of Christ.”

In Burscough, David succeeds the Rev. Simon Glynn, who sadly died in July 2017 after a short illness, just over a year after he was appointed from Christ Church Parbold and All Saints Appley Bridge.

“I won’t be arriving at St John’s with a thought-out plan: a vision is best worked out prayerfully with the good folk of the congregation and the parish. It is a church that is growing and has had superb ministry there.

“There is opportunity for the church to plant new congregations and help with resourcing the Deanery and the wider Liverpool Diocese by planting and for new people to be drawn into the life of faith at St John’s.”

Although David his swapping Liverpool Diocese for Blackburn Diocese, he will always remain a son of the North East.

David is a passionate Sunderland supporter, despite the club’s more recent woes. As he says: “When the going gets tough, that’s when you find out who the true fans are!”

Any words of wisdom for his successor?

“Enjoy it – a wonderful job with wonderful colleagues. My prayer for my successor is that they have joy and delight in serving God and his people, and seeing his Church grow in Lancashire!”

David will be inducted at St John’s (L40 4LQ) on March 25 at 2.30pm and friends and former colleagues are invited to attend the service.

Vine Community Quiet Morning – ‘I am the Vine’ 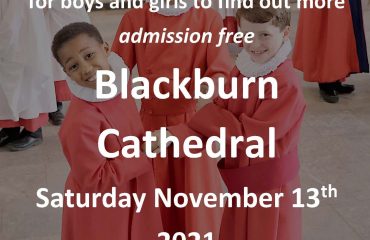 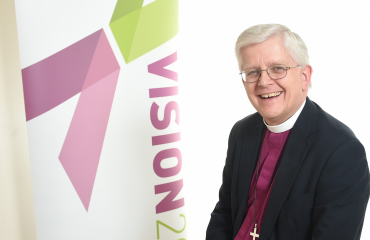