The History of Blackburn Cathedral

Blackburn Cathedral was formerly the parish church of St Mary the Virgin, becoming a cathedral in 1926, when the Diocese of Blackburn was created. Essentially a Georgian building, designed by John Palmer and consecrated in 1826, it stands on a site reputedly associated with early Christianity. The foundation is believed to date from the year 596.

The claim was made in 1347 by John Lindley 5th Abbot of Whalley in his work "De Statu Blagborneshire". His reference is obscure, and his dating known to be less than accurate, but there is evidence that Romano-British Christianity survived in the district after the Romans left at the beginning of the 5th Century.

It is not unreasonable to concede that Abbot Lindley was correct and a church existed in Blackburn before the arrival of the Augustinian mission landed in Kent in 597.

Whalley is mentioned by Symeon of Durham's chronicle against the year 798, when there was an attempt to reinstate Osbald (after whom Osbaldeston in Blackburn is named) who had reigned as King of Northumbria for 27 days: “Ealdorman Wada, entering into a conspiracy formed by the murderers of King Æthelred, fought a battle against King Eardwulf, in a place called by the English Billingahoth [Billington Moor], near Walalege [Whalley, Lancashire]; and many on both sides being slain, Ealdorman Wada, with his men, was put to flight, and king Eardwulf royally gained the victory over his enemies.”  Manuscripts D and E of the ‘Anglo-Saxon Chronicle’ add further: “there was a great fight in the land of the Northumbrians, in Lent, on the 4th of the Nones of April [2nd April], at Hwealæge [Whalley]; and there Alric, the son of Heardberht, was slain, and many others with him.” 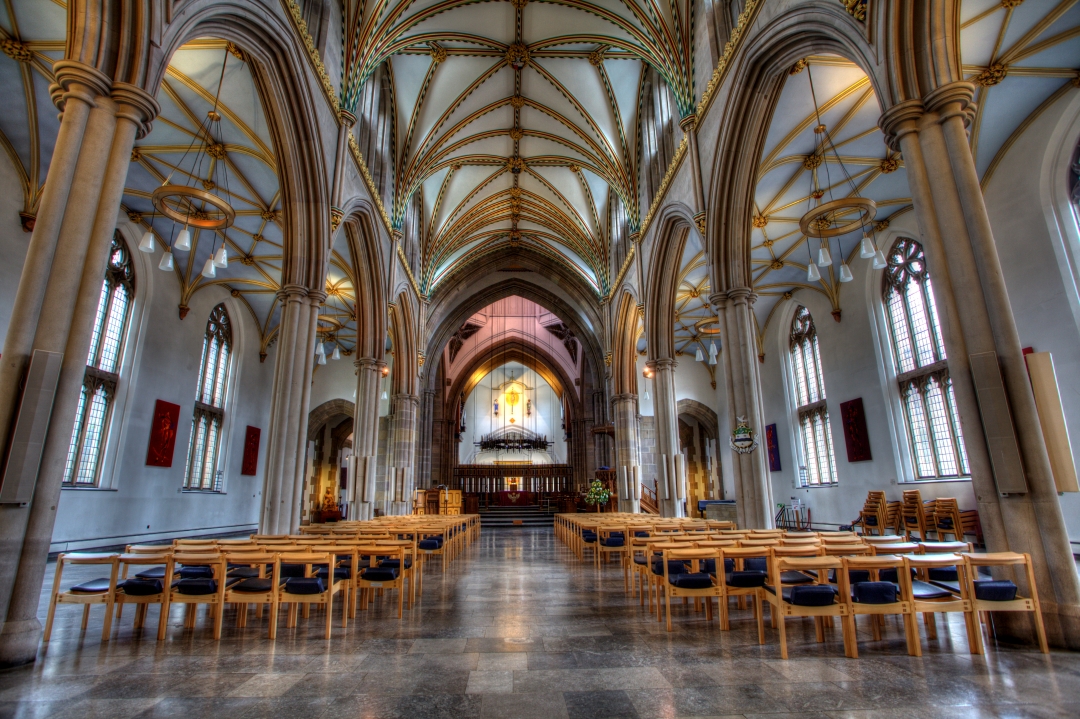 The earliest documentary evidence of Blackburn is in the Domesday Book, which was compiled in 1086. Here it is recorded that the Blackburn Hundred was assessed for geld (Danegeld) for two hide and two carucates of land. This shows that the church had been established by the reign of Ethelred the Unready (978 – 1016). We are told that the Saxon chronicles mention Blackburn as a township, whose inhabitants fought bravely against Danish invaders. The chronicles further state that in the reign of King Edward the Confessor (1042 – 1066) the church was already dedicated to St Mary and known as the ‘Inn of the Lord’.

In the Domesday Book it is recorded that Blackburn was held by Edward the Confessor and that William the Conqueror (1066 – 1087) claimed it for himself by right of conquest.

The patronage passed to the family of de Lacey, by whom it was presented in the 12th Century to the Cistercian Abbey of Stanlaw in Cheshire. In 1283 the monks persuaded Henry de Lacey, Earl of Lincoln and Lord’s of Pontefract and Clitheroe, to grant them the valuable Rectory of Whalley in Lancashire where they relocated. Earl Henry stipulated that the bones of his ancestors and others buried in Stanlaw should be interred at ‘The Blessed House in Whalley’, and this was done. Whalley appears to have been dependent on Blackburn, but with its advancement the position was reversed and St Mary’s became subservient to the monastery. Eight C15th misericords have survived from Whalley Abbey were installed in Blackburn Cathedral.

It is believed that at this period a Norman church stood on the Saxon site. When the foundations of John Palmer’s church were being dug about 1820 there came to light blocks of stone incised with Norman patterns and carved capitals. The architectural history of the church is known with certainty from the fourteenth century, when it was rebuilt in the decorated style during the reign of King Edward III. Fragment of medieval glass from this church are preserved in a window in the South Transept of the Cathedral.

In common with other important medieval churches. St Mary’s was enriched with Chantry Chapels, where priests prayed for the souls of the donors. The Walmsley family and the Osbaldestons of Osbaldeston each founded one. In 1451 during the early part of King Henry VI’s reign, Thomas Stanley, 2 Earl of Derby established yet another chantry to which was attached a song or grammar school.  The priest appointed was to concern himself chiefly with the salvation of the earl and his ancestors, but the deed of the endowment also required that ‘he must be sufficiently learned in grammar and plainsong if any such be gotten’

In common with other such foundations the chantry was dissolved in 1547 and the endowments used to found Blackburn Grammar School, which was granted a royal charter by Queen Elizabeth I.

During the time of the battle of Preston, during the Civil War, the church was despoiled by Cromwell’s soldiers. The most treasured relic the Cathedral owns is the 15th Century Pax, a small gilt tablet engraved with the Madonna standing on a crescent moon holding the baby Jesus, which was kissed by priest and congregation at the moment of the peace in the Mass. Most of these were destroyed at the Reformation, and as far as is known, only eight now exist in England. The Blackburn Pax had been hidden in a gravestone in the churchyard and came to light in 1820 when the stone was being moved to make way for the new church.

By 1818 the old church was in disrepair and it was decide to build a completely new building. John Palmer was asked to build the new church. A pioneer of gothic revival of which St Mary’s must have been a very early example, it was still a Georgian church. This building forms the Nave of the Cathedral and was adorned as we see it today as part of the ‘completion scheme’ of the late 1960’s by the Architect Lawrence King and rededicated in 1965 in the presence of HRH Princess Margaret.

It was William Temple, when he was Bishop of Manchester who decided that Blackburn Parish Church should become the Cathedral for the new Diocese of Blackburn. One of the reasons was that the large churchyard sharply fell away to the East and therefore any extension would not only create space at Cathedral level, but also space at undercroft level, giving a large number of rooms under the Cathedral. In the original scheme, drawn up by the Architect WA Forsyth in 1933, there as space for a Refectory, Library and Chapter House. Temple’s ideal was that as well as being a place of daily worship, it would also be ‘a centre of influence on all aspects of people’s lives’. 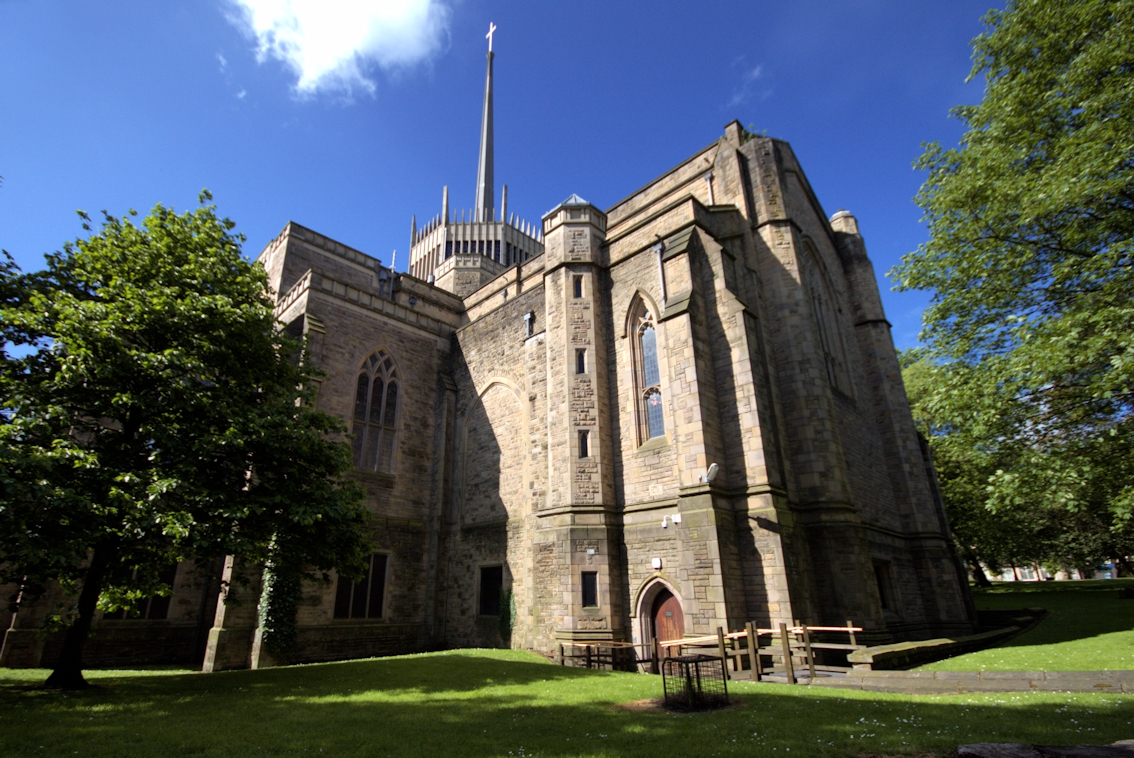 The 1933 scheme for which all the money had been raised was for a grandiose cathedral using the old parish church as the Nave. The style was ‘modern gothic’ reflecting the simpler and more severe contemporary style. There was to have been a huge central tower and large transepts and a long chancel. The Foundation stone for the building was laid in November 1938 by the Countess of Harewood. The outbreak of war meant that work drew to a near standstill. It was not until 1950 that work could really begin in earnest and by then inflation and rising costs meant that the original scheme had to be curtailed.

In 1961 Laurence King was appointed architect to the cathedral. It fell to him to adapt the design. He solved the problem by substituting the iconic Lantern Tower for the massive structure proposed by Forstyth, placing the Sanctuary directly beneath it in the central crossing. This meant that wherever people are seated the drama of the liturgy is visible.

It was during this time that the dark Victorian windows were removed from the Nave and the floor of Derbyshire polished limestone installed.

The sanctuary furniture with the striking Corona, both a crown of suffering and a crown of glory, and the angel pendentives are by the artist John Hayward who also designed the Worker Christ at the rear of the Nave. From the Corona our eyes are taken upwards by the intentionally thick cables to the central boss of the Lantern Tower depicting the Holy Spirit. Looking down over the whole cathedral is the Rood, the work of Advent Hunstan, the famous woodcarver.

Cathedrals are ever changing places, responding to the needs of people they seek to serve. In 2001 it was decided to try to realise William Temple’s aspirations set out in 1933 in a way which would meet the needs of the 21st Century, by restoring the heartbeat to Blackburn town centre. For 14 years the Chapter worked in partnership with the Borough Council and others to regenerate the Cathedral Precinct and the surrounding area now known as the Cathedral Quarter. These plans came to fruition in the £33m regeneration scheme, completed in 2016 including a new hotel and office block as well as a new Eastern precinct for the cathedral. It also houses a Library, Refectory, teaching and meeting rooms and offices. There are also ten residences for clergy and lay staff, a Cloister Garth and 50 space underground car park. 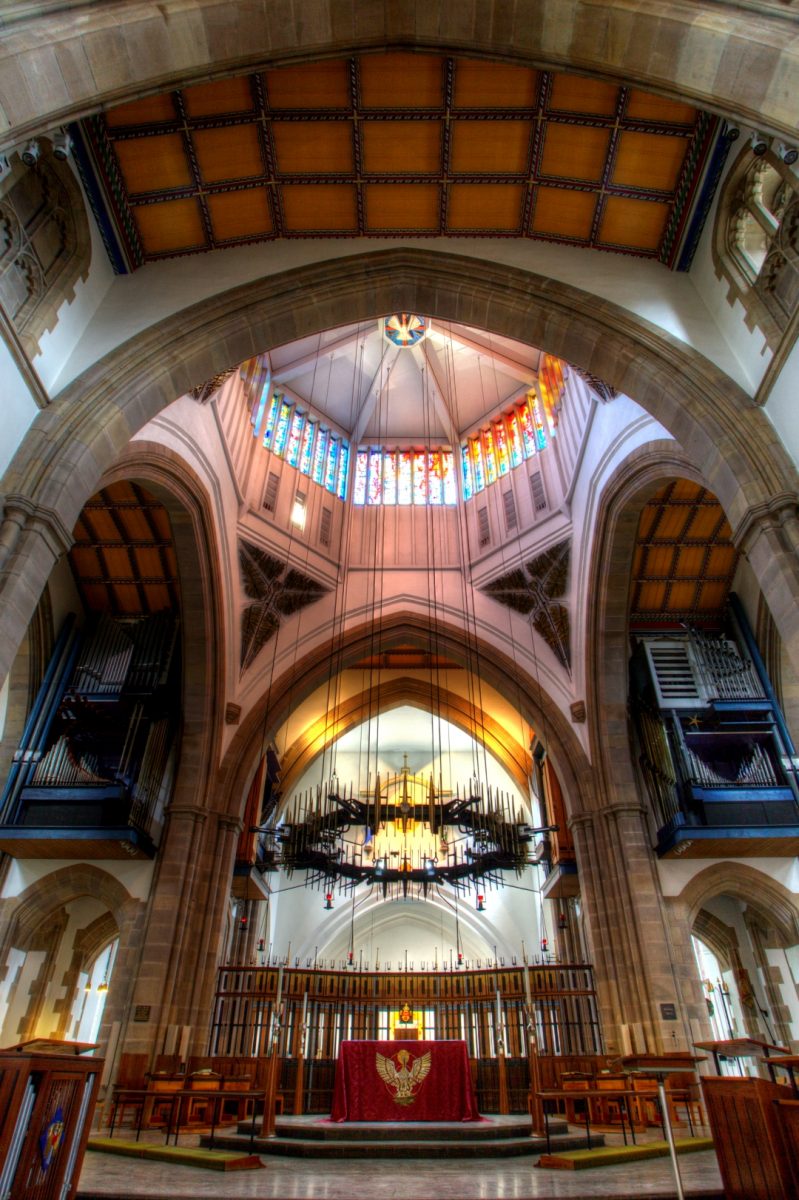