"Children of the 21st century live and grow up surrounded by opportunities, where the choice of after-school clubs and extracurricular activities is vast, all supplementing what is often already a rich school environment. So, with so much already on offer, why consider joining a cathedral choir?

"I believe we have the best answers to that question here at Blackburn Cathedral, and that what we offer young boys and girls as members of the Cathedral choirs is not only an unrivalled experience, but one that will leave every chorister with skills and memories that will last a lifetime. So, for more information, and to find out what’s involved, read on! I hope your son or daughter will enjoy a long and happy time as a chorister here at Blackburn Cathedral!" 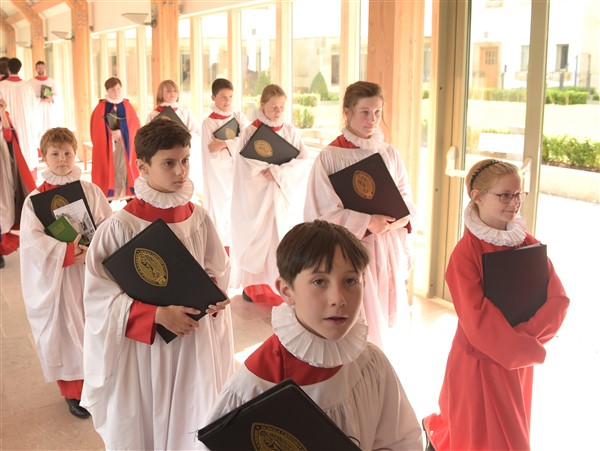 Benefits of being a Chorister

Being a chorister at Blackburn Cathedral has many benefits.

First and foremost, joining the choir opens the door to a unique musical education, in an environment where boys and girls meet and make friends with similar interests to their own. Choristers also learn how to work in a team, and how to integrate socially too.

At the cathedral we work to the very highest musical levels, so choristers learn to focus and concentrate, aspiring to professional standards, and achieving their absolute full potential.

There’s also evidence that being a chorister can boost academic achievement (and this evidence is supported by several current chorister parents!).

A chorister’s education goes beyond music - singing in foreign languages soon becomes second nature, and choristers also find membership of the choir a vehicle for spiritual development as they learn about the Christian Faith.

Perks of being a Chorister

If all of that isn’t enough, you might be interested to hear some of these perks of being a cathedral chorister:

The cathedral community is diverse, and being a part of it is equally rewarding.

The chorister parents are an integral part of this community, and there are many opportunities to get involved, should you wish to! For the singers amongst you, there are various choirs for adults, but also chances to join the team of stewards, sidesmen, churchwardens, bell ringers, or welcomers.

Whatever happens, all parents can’t help but enjoy hearing their son or daughter sing at cathedral services. Any child’s years as a chorister are limited - especially with boys, where vocal change occurs in teenage years. This is one thing that marks the chorister experience out - take the opportunity while you can!

What's involved in being a Chorister?

The Cathedral Choirs operate during school term time, though commitments can sometimes fall outside of term dates. Cathedral choir terms are drawn up to coincide with as many schools as possible. A diary is issued every term with notice of dates up to a year in advance.

Our normal weekly pattern is as follows:

The Cathedral Choir - boys from age 7

This is the starting schedule for boys when they join the choir. After an initial period as a probationer (this varies from boy to boy, depending on speed of progress made), the schedule is then expanded to include a slightly later finish on Fridays, a slightly earlier start on Saturdays, and two services on Sundays.

Both choirs are involved with occasional extra services, concerts, and trips. Parents are notified of such events as soon as possible on an event-by-event basis.